WANT TO MAKE A DIFFERENCE?

Join Tertiary Vinnies. This is for Young Adults who want to be a part of a movement that serves in the community with the hope of making a difference. We have a facebook group page, Tertiary Vinnies Auckland, add yourself to the page if you want to know more information. https://www.facebook.com/stvinnies or email youth@stvinnies.co.nz

There are different projects to volunteer on:

We have our Tertiary Pizza night that is coming up on the 27th April 6pm @ Newman Hall.
Meet new people, getting to know each other, plan for upcoming projects and providing fun activities. Come and hang out with us. Hope to see you there.

MAY OUR DEAR PATSY REST IN GOD’S ETERNAL LOVE

FEEDING families in need, visiting the elderly and bereaved, and providing advice from budgeting to spiritual, is all in a day’s work for long serving Vincentian Patsy Dwyer from Star of the Sea Parish in Howick.

For over 40 years she faithfully served her parish and those her sought assistance in the community. Patsy was well known and loved by many. She always had love to give, energy to burn, kind words and a hug to share. She loved and mentored many of the Vinnies Youth over the years in how to love and serve. You will be sorely missed dearest Patsy. 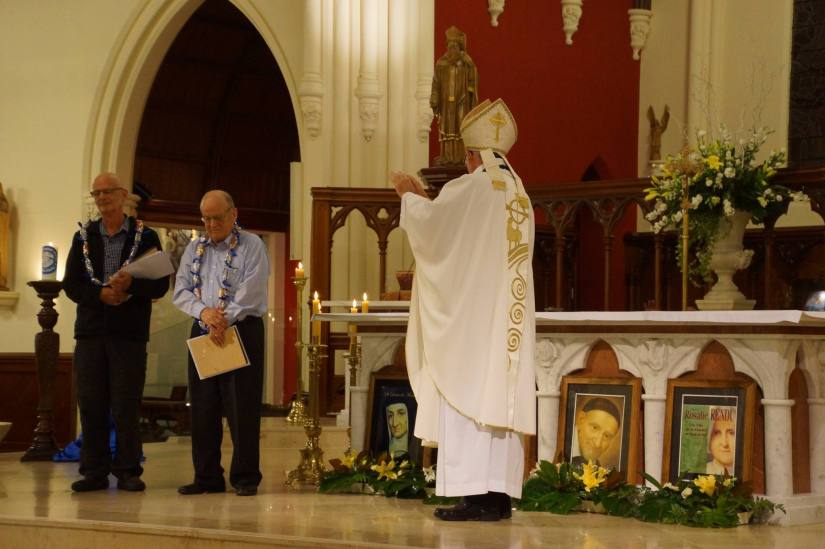 At the Vinnies Commissioning Mass long serving Vincentians Courtney and Bill van Dam were farewelled and honoured for their work with the Society of st Vincent de Paul. At this mass they were also given a special  blessing by Bishop Patrick Dunn and presented with the Mercy Cross by Kevin Mulcahy on behalf of the National Board. the Vinnies Youth also presented them with Mercy Cross Plaques carved by one of the Vinnies.

Joined the St Benedict’s SVdP Conference in 1985 and in 2004 became the President for 6 years. He also became the President of the Auckland Metropolitan Central Council  for 6 years from 2008 – 2014. In this time he was also elected on the National Board where he served one term from 2009-2011. in this role he travelled Sri Lanka, Samoa and Tonga to support the SVDP partnership programme (Twinnings) work there.

Peter Courtney has always been an avid supporter and advocate for the work of St Vincent de Paul.  His volunteer work as a SVDP member included work in Sunday liturgies in  Mt Eden Prison, Auckland hospital, food parcels,  rest home visits, Angel tree Christmas appeal for children of prisoners and providing resources  to support schools in the Pacific.

Here he in Auckland Peter has also been one of the most active supporters of the Vinnies Youth programme and invested alot of time to work alongside, mentoring and affirming them in the work they do. He will be missed by the youth.

Bill van Dam
Bill joined as a SVDP conference volunteer in the early 1980s. His volunteer work included the SVDP St Benedict’s Conference Night Patrol van – In support people who were sleeping rough in he vicinity of city. They went out regularly to visit people and also give practical support. He visited Paremoremo Prison ministry on a regular basis assisting with programmes and also leading Sunday  liturgies for residents.

Alongside this work was the coordination of food support for families, and his significant role with the Liston Hostel Trust and the Airedale Shelter a dedicated service to provide overnight beds to rough sleepers in the Auckland City area. Bill managed the Airedale shelter for many years and also oversaw the finances and personnel  at James Liston Hostel. In addition to this work he also supported the Refugees who were then housed 2 St Benedicts Street.

In the late 1980s the AMCC ran a little operation based out of a small shop/office in  Symonds street centre where they ran an Oppurtunity shop, foodbank and a small office to support the work of the Auckland area councils. Bill was officially employed by the SVdP Auckland Metropolitan Central Council as their secretary in 1992. In this role he supported the work of the difference Auckland area councils and coordinated assistance for those who were homeless and the different people coming in for various types of assistance.

Another significant part of Bill’s work was in support of the Samoa St Vincent de Paul Conference. He travelled many a time in the early 1990’s to assist in the setting up of the Samoa youth programme and also to build connections with the Vincentians there. In addition to this is his work with the Auckland Vinnies progamme. Bill was one of the founding members of the Auckland Vinnies Youth and still today continues to passionately support this works of service. We wish to thank and honour these two Vincetians for their amazing  contribution to the woks of the Society of St Vincent de Paul and those they seek to serve.

“For with Jesus anything is possible, through him, with him and in him”

Earlier today, a few young and inspired men from St Peter’s College visited the Mother of Divine Mercy Women’s Refuge where a deep sense of Faith was found. Hearing testimonies from the youth who have overcome the most difficult and painful moments of life to connecting with one another and giving thanks to our Lord for giving us ‘Hope’ to forgive with the power of his love. Laughter and praise permeated the air as the youth came together to share in a meal – a meal of thanksgiving for all. 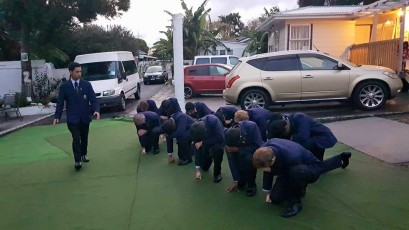 A big Thank you to the teachers and students of SPC for the love and generosity shown also to Mother of Divine Mercy Youth for welcoming all with open arms and for giving these young men the opportunity to connect and build a strong relationship .

These passionate volunteers Wade and Dave helped out today with the packing of clothing and other items that will be going overseas. Thank you also goes to Polynesian shipping for the support. The Society wishes to congratulate and thank all the volunteers who enable the work to be done and the services to be delivered. They really do make a Difference.

In today’s session at Sancta Maria College, they talked about Justice and how Vinnies tries to live out the Catholic Social teachings in its work and practices. It was great to get input from the group on how they assess need and inform the decisions they make about how and who they help.

On Saturday 9th April 2015, St Vincent de Paul Society, family and friends in Auckland came together to celebrate the commissioning of around 70 Vinnies Youth leaders from across 13 Secondary Schools and various, tertiary, Parishes and community. This took place at St Patrick’s Cathedral.These leaders were were joined by members of the Society, and friends, family and supporters. Bishop Dunn encouraged and blessed the new leaders as they began their journey of service in 2016. Each leader was handed a candle, symbolising the Light of Christ.

In the opening address, Pelasio Iaseto Filo (youth worker) said, “It is tonight that we honour a legacy almost 200 years in the making – a long tradition started by Frederic Ozanam. A young man himself who gathered other young people around him to serve in hope of a better tomorrow. It has been moving to see this truth lived out by the many Vinnies youth here in Auckland.” We thank all these young men and women who are dedicated to making their faith real through serving as Vincentians. Commissioning Mass for Auckland Young Vinnie leaders held at St Patrick’s Cathedral . 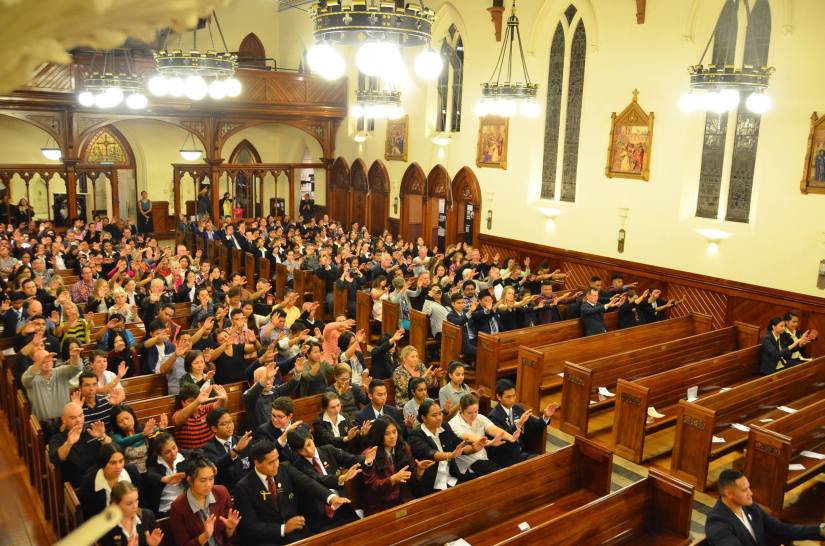 ‘FIGHT THE GOOD FIGHT OF FAITH’

First Vinnies meeting for the year at De la salle College. Great to reconnect with the old and young men . These students had the opportunity to unpack more on the Charism of the society of St Vincent de Paul and how it will have an impact on some of the service projects that they have planned for the year, also understanding and building the relationships with those in need.